Not far away there is a beautiful green valley, where the sun shines often, and where the trees give shade in summer, and shelter in winter. Water falls with a splash over the rocks of a little stream that runs through the glade. Happy white sheep roam the little hills and graze the grass. Just beside the stream there is a house, and in this house lives a boy called Pierre with his father and a dog called Argan. 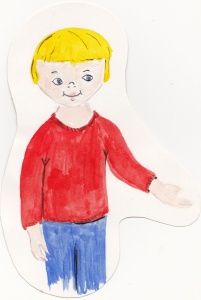 Pierre’s father is a shepherd who looks after the sheep. Every morning he rises at dawn, takes his crock and Argan to walk through the fields, making sure that his sheep are well.

One morning Pierre woke up to discover the first daffodils opening, which meant that spring was arriving. He became excited because he knew that when spring came, the lambs would soon be born.

Day after day Pierre begged his father to take him on his walks, but each day his father said, ” Not today son”. Pierre was very disappointed but he waited patiently and hopefully. Sure enough, the morning came when his father said, “Today you can come with me, I have something to show you”.

Pierre hurriedly put on his scarf and boots and followed his father. As they climbed the hill he became tired but he strove on full of anticipation. Eventually his father stood still near a hedgerow. He pointed silently into the thicket beckoning Pierre to look. Pierre peered into the thicket and gasped in delight as he saw a ewe licking her new born lamb. As Pierre watched, the little lamb shivered from head to toe, then picked up his two front hooves, balanced on them and with determination lifted himself up to stand unsteadily on his four limbs. Then he turned to his mother in search of her milk. 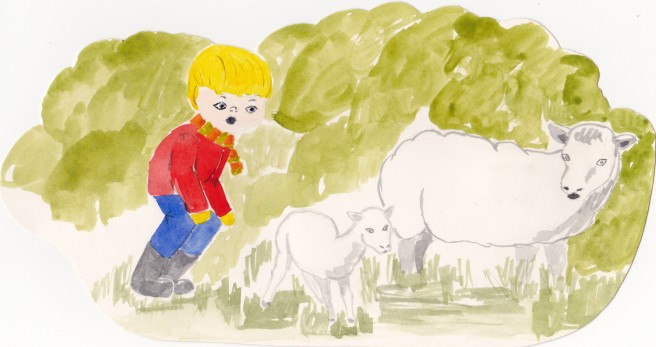 For a long time, Pierre and his father watched spellbound as the lamb became stronger and more curious, while his mother guarded him protectively. The little lamb became fearless enough to wander towards Pierre, who was able to stroke the lamb’s skin. All too soon Pierre’s father said, ” It’s time to go home and leave them in peace”.

As they walked back, Pierre realised that he would cherish the memory of the first lamb of spring forever.

7 thoughts on “First Lamb of Spring: A childrens story.”