Most mornings, a group of men come together to sit around a table at the café in town. They read their papers, drink coffee, debate issues of news, politics, and general topics, or simply banter with each other. They come from diverse backgrounds, and each have a life time of experience and knowledge to contribute.

Yet no story is more extraordinary than the Colonels. Born in Ardennes in 1924, he was nineteen years old when he joined the Resistance Army during World War Two. After the war he attended military school, and was commissioned a Lieutenant in the 2nd Foreign Parachute Regiment. His first deployment was in Vietnam, where his Regiment, (made up of foreign, french and vietnamese men), battled in savage conditions. The mortality rate was high, but the Lieutenant returned to France after three years. He was cited many times for courageous action under fire, and was awarded his first distinction as ‘Chevalier (Knight) de la Legion d’honneur’ in 1955.

After Vietnam came the war in Algeria, and as Capitaine of 11th choc Parachute Regiment, he went to battle again. Further citations of courage in the firing line brought his elevation to the second distinction of ‘Officier de la Legion d’Honneur’.

From 1961 the Capitaine took charge of training reserve soldiers for 13th Parachute Dragoon Regiment in Tunisia. It was here that he became Colonel, and commander of the Regiment, after being awarded a third distinction as ‘Commandeur de la Legion d’honneur’. The Colonel retired in 1981, after thirty seven years of service in the Foreign Legion.

Today, 18th June 2015, Colonel Jean Bertrand is ‘élevé à la dignité de Grand Officier de la Legion d’honneur’ ( elevated to the rank of a Grand Officer of the Legion of honour ) in recognition of his leadership qualities, bravery and long military service for France. The ceremony is held in the Colonels home village in L’Entre Deux Mers. The medals are presented, and placed on the Colonels breast by a brother in arms, also elevated to the rank of a Grand Officier, General Jean Singland.

Colonel Jean Bertrand, now a ‘Grand Officier de la Legion d’honneur’, turns to give thanks to all his brothers in arms, officials, the elected, family and friends. Our story comes full circle as he acknowledges his café bar copains (friends) who colour his mornings, these days. For us, it feels a privilege to be a copain of this remarkable man, and to be invited to share his special day.

The Colonel ends the ceremony with a warm smile to his wife, as he informs his audience that they celebrate their fiftieth wedding anniversary, this very day!

Ordre national de La Legion d’honneur was established by Napoleon Bonapart in 1802. He believed that the citizens wanted all to have the opportunity to be recognised, and honoured for their exceptional service to France, and her Empire, in the Arts, Sciences and Military. Previously, only the nobility had been rewarded for good works, and this had been abolished in the wake of the Revolution. It has evolved over the years to include women, personalities, foreigners, educationalists, diplomats and sportspersons, ect. It is a beloved Order, and those decorated represent the qualities and graces of France, and her citizens, before the world.

There are five increasing distinctions within the Order,  which are, ‘Chevalier (knight), ‘Officier’, ‘Commandeur’, ‘Grand Officier’, numbering 250 persons (excluding military), and ‘Grand Croix’, awarded to 74 persons at present. The award is usually presented by the President of the Republic of France.

The Foreign Legion was established in 1831, to enable foreigners to serve in the French Army, and is open to french patriots. It was formed to protect, and expand France, and her Colonies. Its mottos are, ‘Honneur et Fidélité, and ‘Legio Patria Nostra’ ( The Legion is our Fatherhood’). Foreign soldiers are free to preserve their first nationality, but are required to adopt the Foreign Legion as a new fatherland. Training is reknowned as physically and psychologically challenging, and has become a model for other armies. The Foreign Legion has become mythical in its reputation as an elite military service.

Claude Monet took a stroll through the Paris Universal Exhibition in 1889. That year, Gustav Eiffel presented his Eiffel Tower, and Joseph Bory Latour-Marliac, his hybrid waterlilies. Monet fell in love with his lilies, and was immediately inspired to create a waterlily pond in his own garden.

Latour-Marliac had previously set up his propagation garden in 1875 at his home, Giverny, near Temple sur Lot. Here he crossed a white european waterlily with other species from across the world, and created a collection of hardy waterlilies in shades from pale yellow, to fuschia through to red. His method remains a mystery. 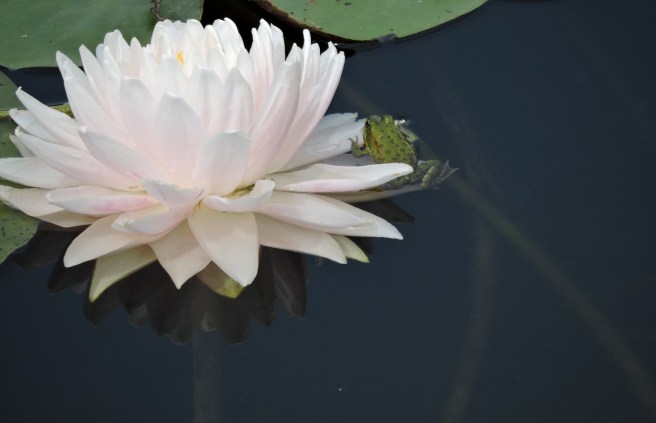 After their meeting in Paris, Monet corresponded with Latour-Marliac. They became friends, and Monet regularly purchased waterlilies to furnish his pond.

‘Le Jardin des Nénuphars’ of Latour-Marliac thrives today, and continues to propagate, cultivate, and sell waterlilies, and lotus. It was here that we bought a Monet waterlily, for our humble garden pond.

I thank A Momma’s View for nominating this blog for a Premio Dardos award.

I respectively pass on the award through nomination to others who have ‘cultural, ethical, literary, and personal values transmitted in the form of creative and original writing’. They are:

Rules are: To accept the award by posting it on your blog along with the name of the person that has granted the award. Include the images of ‘Premio Dardos’ in the post, and pass the award to other blogs that are worthy of this acknowledgement.

A road always goes somewhere. It travels from farm to village, from village to market town, and on to city. A market town is always about twenty kilometers from its neighbouring town. This means, no one is more than ten away from their nearest, and enables one to walk to market, and home again in a single day. Once upon a time, it was a neccessary convenience.

In between these roads are farmland, and vineyard.  During the days of June, I follow such roads, and I see that the vine is vigorous, clasping to anything so that it can climb toward the sun, and that the young grape is formed.

Wrap around,
and tie a knot,
securely we can grow.

Nourish me with sunshine ,
rain and mineral,
my fruit will flourish.

Green, green valleys of red, red wine,
stretch as far as the eye can see.

My curious eye cannot resist peeping through gates, or over walls to discover, and enjoy back gardens..

And a colourful balcony.

A young couple bought a quarry alongside a disused railway line. They had very little money, so they built their house with their own hands, and slowly transformed the quarry, over forty or more years, into a shady, colourful garden. They planted trees, shrubs and flowers.They cultivated fruit trees and grew vegetables. And they continued the countryside custom of breeding pigeons to sell at their local market.

Each time I visit, I am delighted to see such a paradise for pigeons, where each breeding couple is so clearly loved and looked after.

Then with alchemic fire force
our daily bread
he forms.

Remembering the humble caterpillar, without whom we could not run through butterfly fields.

PS. I could not resist bringing photos and poems from ‘Simply Snapshots’ to add them to ‘Between Two Tides’ in harmony with its calender theme.

The Railway of L’Entre Deux Mers was constructed in stages between 1860 and 1899. It opened up a passage through the Dropt valley creating a link between Bordeaux and the towns, and villages in the heart of L’Entre Deux Mers, as far as Eymet, across the west border in Lot et Garonne department. Initially it was built specifically to carry stone to Bordeaux, but soon functioned to transport goods, and passengers, typically three times a day. The railway crossed multiple roads, and at each, a barrier was essential for safety. To operate the barrier, a ‘Garde de Barrière’ (gatekeeper) was needed.

The position of a Gatekeeper was reserved for women, usually wives of  railworkers. They were employed to stay at the crossing, open and close the gates, record passage of road traffic, and remain alert to safety irregularities. They were able to earn one of three categories of salary, depending on the workload of their particular crossing. With this employment, they were able to live in a house, next to the crossing, built specifically for the purpose, with their family.

Although small, with two rooms on the ground floor, and two upstairs, these houses were well built using stone, in the classical style. The corners of the building, the windows and doors were dressed with cut stone blocks. A fireplace was situated in the centre of the house. A narrow, steep staircase leaned against a side wall. The kitchen was simple, but held a sink, and water tap, while the toilets were outside.

This gift of a home, came at a price. The gatekeeper was required to be on site, ready to work, seven days a week with no time off, or holidays. She could not be absent. Over decades this changed as workers rights brought the eight hour working day .

During the early years, the gates were left closed, and opened when road traffic required it. The heavy gates had rollers that she pushed manually to open and close, and its tracks needed to be greased regularly. Fortunately this was later replaced with a winch system that raised and lowered the gates. Each time, she would have to log details, date, hour and type of vehicle. Pedestrians were able to pass freely through a side gate, and she would not concern herself with them. A light needed to be lit in the evenings for late trains.

As the little house was situated next to the crossing, her children might often have played alongside the railway, causing anxiety each time a train was due. Up until 1955, trains were steam engined, and many a child who grew up in this environment was suitably impressed for life by the noise of the steam engine, and its iron wheels against the rails. Sometimes, if mother was tired, an elder child might have taken a task.

As road transport grew, and rail became unfashionable, the line was gradually closed. From 1953 the Railway of L’Entre Deux Mers was no longer in use. By 1982, across France, the women of the railways disappeared as automated gate control came into use.

The little houses of the ‘Garde de Barrière’ are homes still, but for private owners who enjoy their connection to the era of the iron horse.