“We will return a warmer day
to sit with you.” 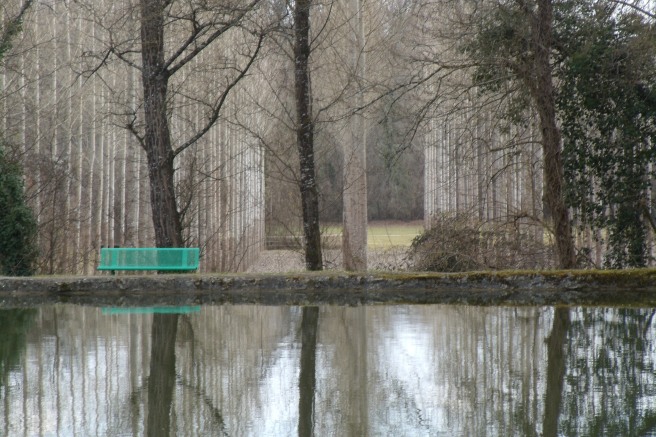 Welcome winter for its
warm firesides, frosts
and low mists, mysterious
worlds where wildlife
hibernate, hedgehogs
beneath woodpiles, beware!
And don’t mind the mice
who scurry in through hidey holes
simply share. 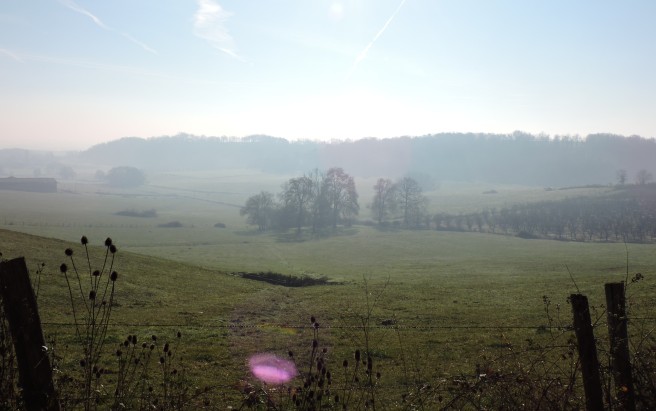 The sky is black, the earth is white;
Bells, ring gaily!
Jesus is born; the Virgin bends
Over him, her face tender. 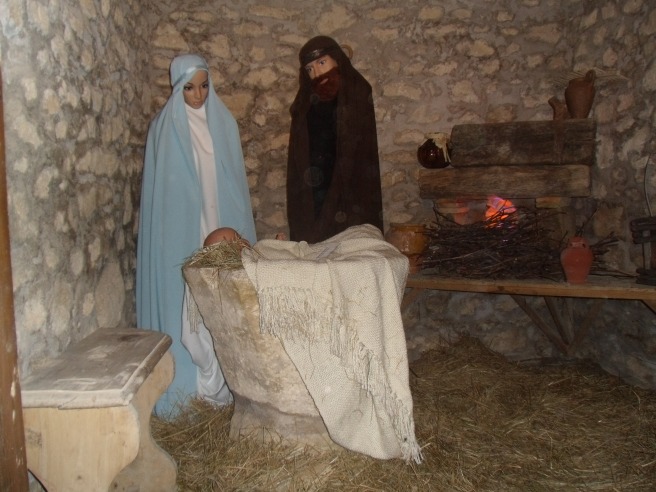 No festooned curtains
Protect him from the cold,
Neither the spiders webs
That hang from the beams. 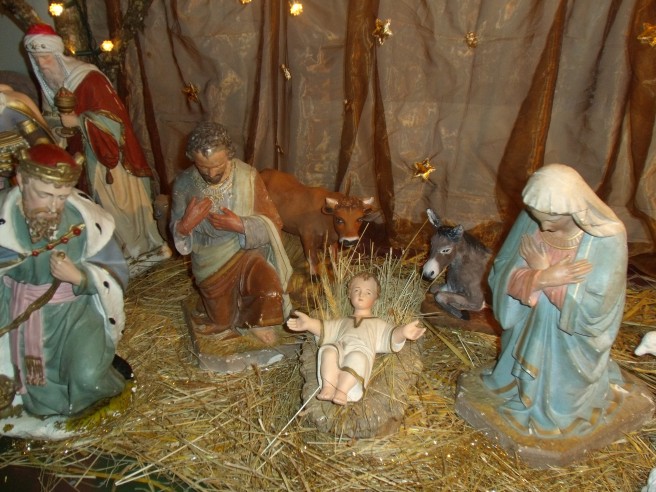 He shivers on fresh straw,
This dear little infant Jesus,
And to warm him
The donkey and ox, over him breathe, 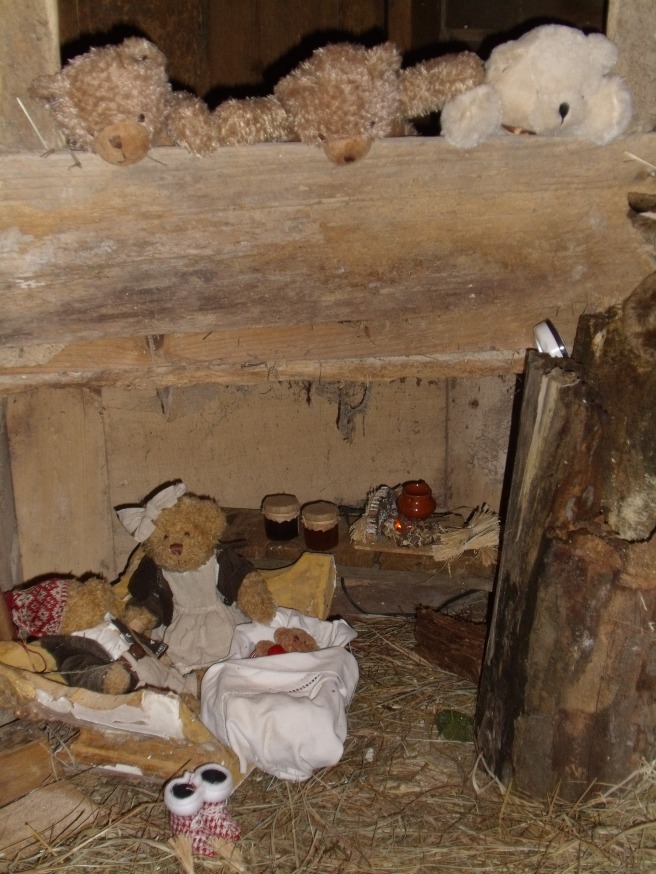 A fringe of snow on the thatch,
Yet above the heavens open
And all in white, a choir of angels
Sing to the shepherds; “Noël ! Noël !”

Temperatures are dropping, and clouds descend to bathe us in damp fog.. 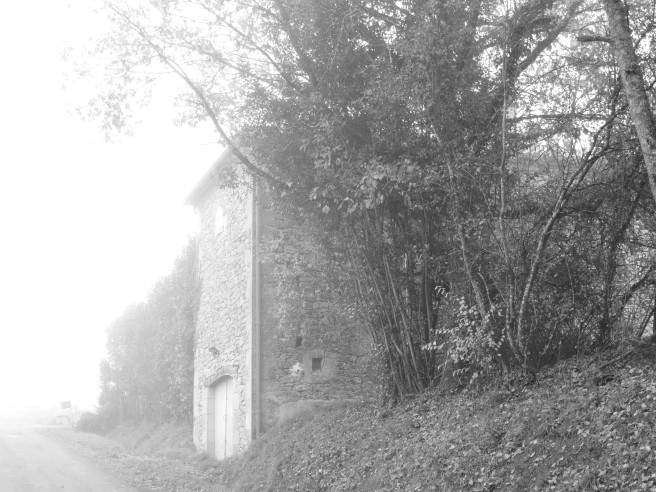 A house enshrouds in sorrow
so sun turns away his smile
then cloud descends, full of tears
as window draws her veil
the door shuts himself tightly
and chimneys heart lays cold.

Within a soul sits weeping
from the world, is slowly waning
into a fog of obscurity. 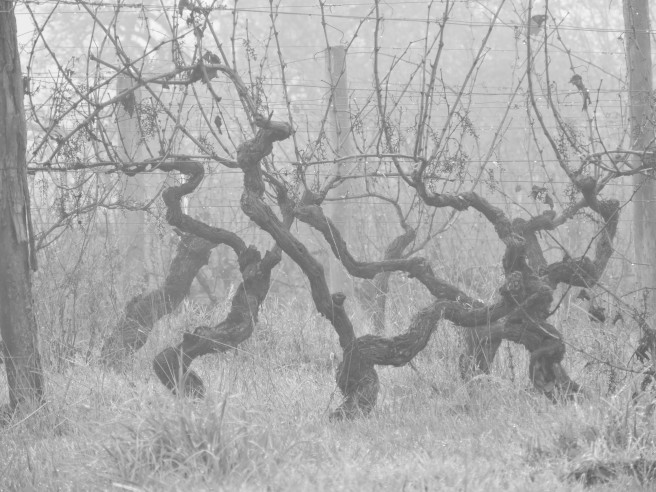 In the vineyard next to our house, there are vines that could be one hundred years old. Producing a white wine grape, they are nicknamed ‘Noah’, after the claim that Noah carried this ancient vine in his Ark. When the disease Phylloxera practically wiped out many vineyards in France, some of this variety survived, due to its strong resistance to the disease, as well as mildew and blackrot.  Also known as Fox grape, it is considered an unfavourable taste today. Instead it is used to graft. This makes our vine neighbour a rarity, and I hope that the viticulturer takes care of them, a few years more. 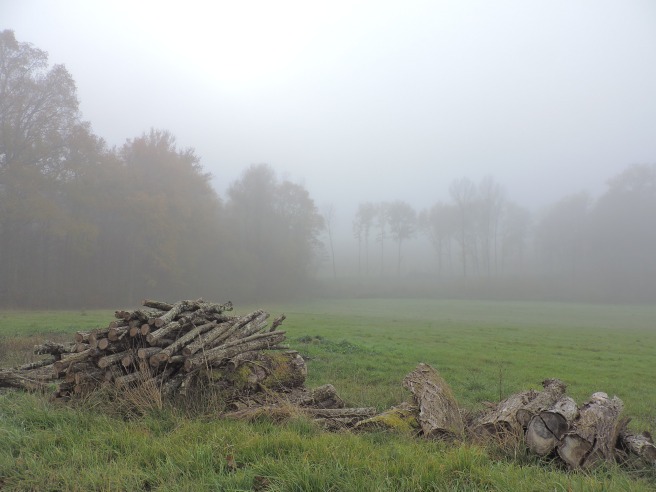 The woodcutter has been into the forest. His service is exchanged for half of the timber he cuts. His white wood dries for a year, but oak sits in the rain for three years to wash out the tannin, then in the dry for two years, before he sells it as firelog.

Jean Michel helped bring Ushita into the world nineteen years ago. The moment she was born, he spoke “Ushita”. It was chosen unconsciously, but the Italian name ‘Uscita’ means ‘way out’ or, ‘to come out’. 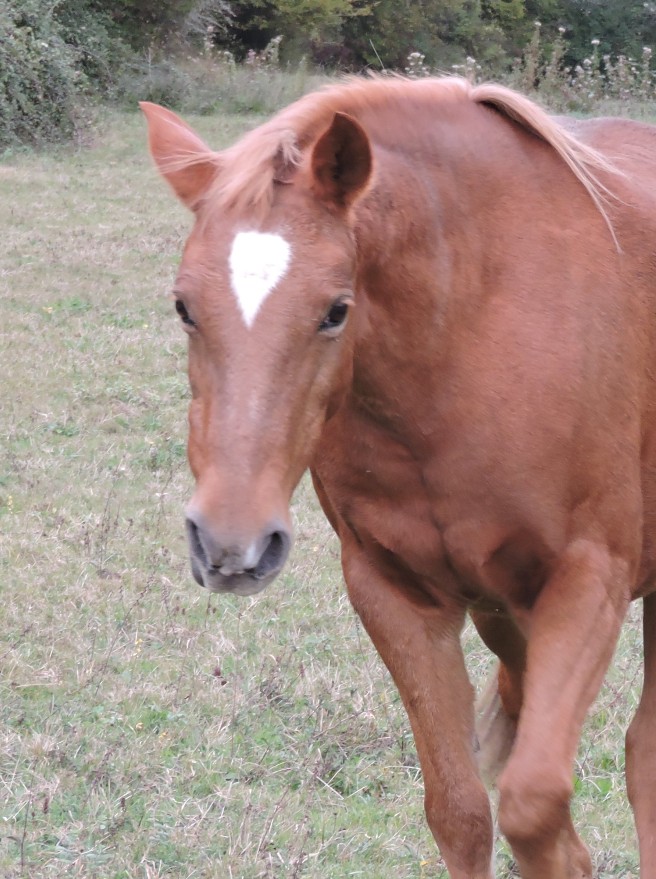 She grew up to be a beautiful pony,  chestnut coloured, with a white heart on her forehead, and white socks. She is considered an exceptionally fast runner, and very intelligent too.  She can quickly become nervous, and with a habit of being an escapee, who no sooner out of her field, begins to perspire in a hot state be back in her secure place.

Ushita has not had the opportunity to have her own young. Instead she became mother, and protector of her little flock of sheep. One particular day that I remember, a lamb somehow escaped the field, unnoticed by his mother. Despite his cries, she was far across the field, and did not hear him. My attempts to help only panicked the lamb more. So I called Ushita, also far across the field, for I knew she would answer. And so she did. Her ears pricked, then in a fraction of a second she understood what was happening, and she raced across the field to rescue her adopted baby, panic in her countenance. Finally, mother realised that something was wrong, and ran after her. Before I knew how, the lamb found his way back into the field, and Ushitas flock was reunited.

This was not the first time that Ushita showed herself as being so bright, and compassionate. It was yet another example, but it has stood out in my mind, because it was so strongly emotive, and immediately responsive, to not only the lamb in danger, but to me also. My love for her expanded immeasurably. It seems to me, she is a fine example of an animal who has beauty in her heart, as well as in her physique.

For the last two years our “Belle Ushita”, has been living on a farmstead, not far from us, in a spacious valley with a small herd of ponies and donkeys, cared for by a lovely couple who keep many types of animals. She forgave us, and is very happy, especially as she now has a ‘husband’.